Sowing While You Sew--Week 2 Results

(If you are following this little series, I would love it if you grabbed a button and pass it on. I would also love to see any projects that you've made!)

Today we had fun sewing with a friend.  My daughter and her friend have known each other since they were less than a year old.  You see their older brothers played on the same soccer team when they were in kindergarten and they are now 14 years old.  There is also another set of brothers that are 12. It's been nice to have friends (we've remained really good friends with them through the years) where there is someone to pair up with...except for poor Clara, who feels like the 3rd wheel a lot when we get together.
Anyway, these 2 girls have been wanting me to teach them how to sew, so this series is a perfect time to get the 2 together.
They worked hard, helping me cut out the fabric, picking out their thread and then got busy sewing their lines. 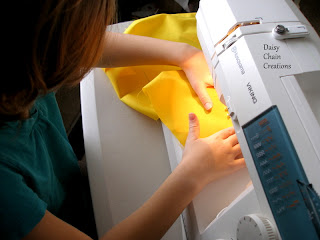 If your machine has a speed control setting I really recommend using it.  It makes a big difference when they know that the machine won't go zipping out of control on them.  When it came to threading the machine, I helped them each time, making sure the thread was really where it should be.  Other than that, they did it all themselves.  They did great at taking the pins out before they sewed over them.  Their lines got better as they did more.  They learned how to pivot at the corners as they sewed it together.  They even had the chance to learn how to fill the bobbin.  I think the thing they had the most difficulty with was pinning the front and the backs together.  It was hard for them to not shift the fabrics as they put the pins in. 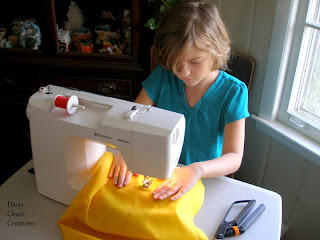 Most importantly, they are happy with the results and pretty proud of what they made. 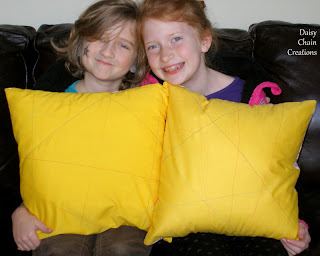 Here's a view of the back.  They picked something a little more colorful to go on the back.  For the friend, we took advantage of the selvage (she had brought some great feed sack material, so it had a very pretty selvage)  and didn't make the hem on the back two pieces. 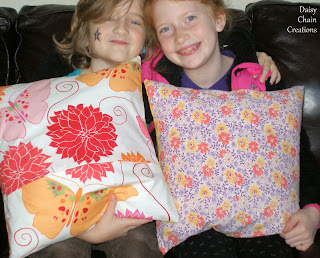 Posted by sallyavena at 3:56 PM