It's that time again, Project Run and Play Signature Look Week.
I think I've mentioned that my "Signature Look" always comes in two (check it out here and here).  As I've read back over those two posts, I don't really think that my signature style has changed that much.  Clean lines, simple details and something comfortable.  These dresses fit that and will be the girl's Easter dresses as well, they just came a little early. 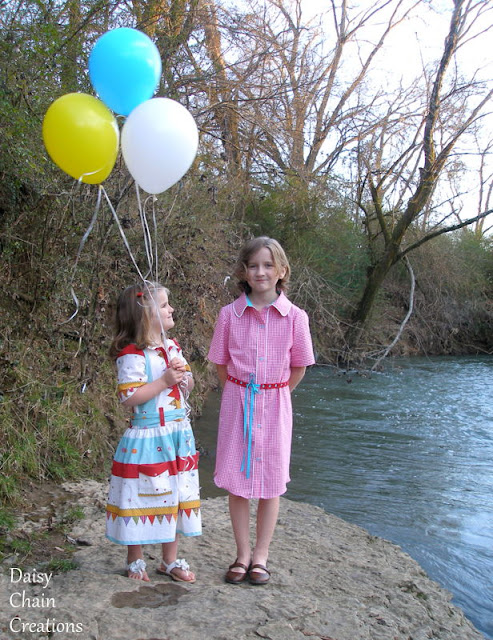 First up, Sophia's.  I don't know if you've noticed or not, but my challenge for myself this time around was to have everything be interchangeable.  For that I picked a color palette and tried to stick to it.  Every outfit I made has something from another week to go with it, so it's all interchangeable along with a few key pieces from her wardrobe already.  I have plans to do a little "Spring Collection Look Book" as soon as I get the last shirt done.
Here are the colors I picked: 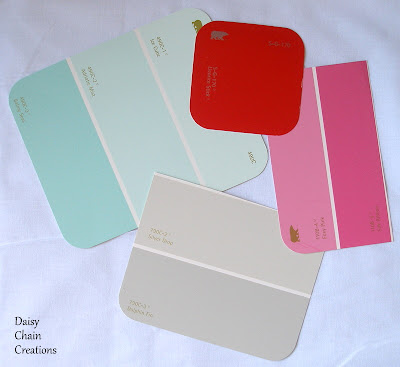 I figured her seasonal look needed a dress as well.  The dress is just a longer version of the shirt I made for last season's Signature Look. It's a self drafted pattern, that fits her perfectly.  I just added the length I needed to make it a perfect shirt dress. 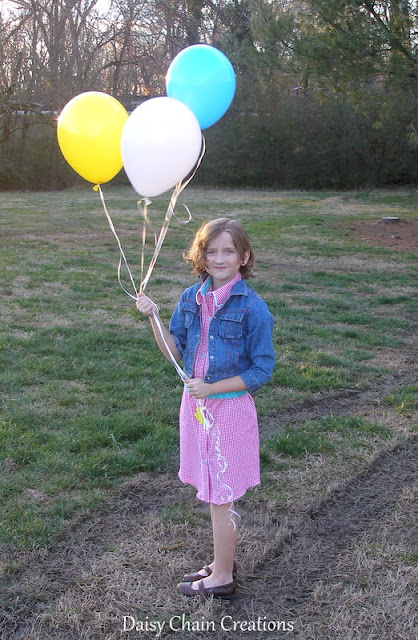 I love how it can be casual, but can be dressed up as well. 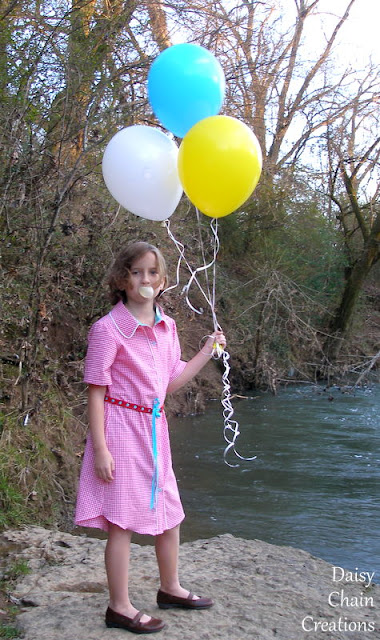 To give the eyes a little break from the raspberry gingham, I added white piping on the collar and down the sides of the placket.  The inside of the collar stand I made out of some contrasting aqua and then added aqua buttons to match. 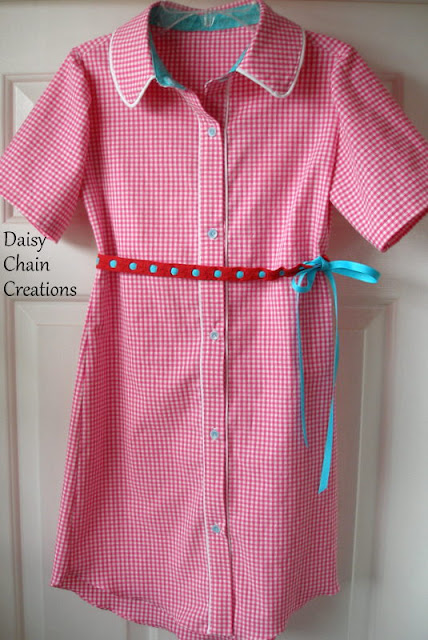 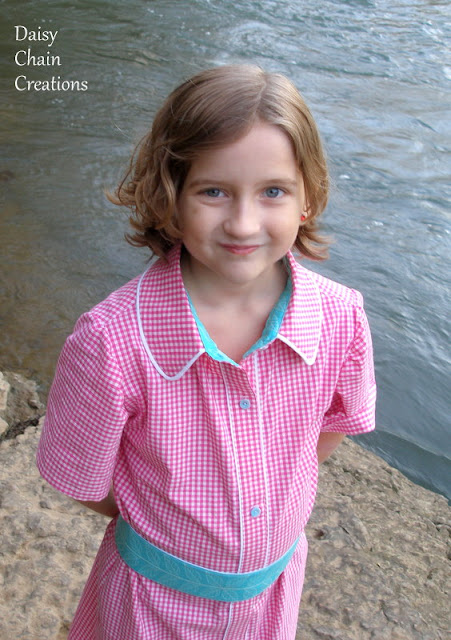 Close up of the colllar. 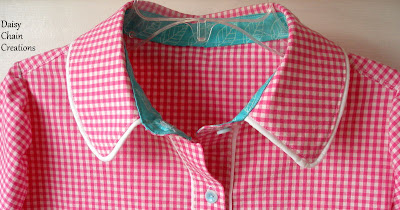 I also added piping at the bottom of the back yolk.  Here you can see one of the belts/sashes that I made to go with it.  I had intended for it to be worn the other way with the bow at the front, but Sophia insisted that it should go this way.  I kind of think she was right and actually like it this way better. 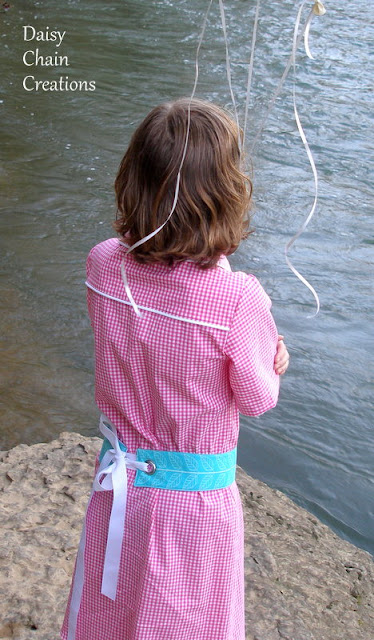 Here are the 3 belts/ sashes that I made to go with this dress as well as some of the other outfits (the red one with the ribbon looks great on these shorts and the aqua one looks great with these pants).
The red one is made by taking the lace insets that are made for weaving ribbon through and doubling it by sewing down the sides. I folded my in half at the length I needed and then turned it so the seams were on the inside and then finished off the one end.  Then I just wove the ribbon through.  Oh, I did dye it first along with my heart fabrics, because the lace was white.
The aqua one is just a long strip of fabric, backed with white.  I did cut the strip in half and sewed it back together so that the leaves would be going in different directions starting at the middle of the back and meeting in the front.  I added two large grommets and it's tied together with a large white ribbon.
The last one is a sash made originally for the skirt from week one, but looks better with the dress. 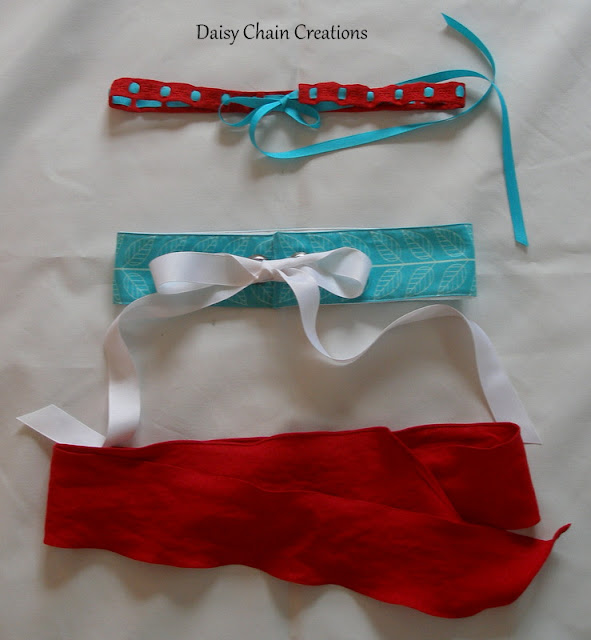 And finally a couple more pictures of just Sophia.  I like how you can see it is a shirt dress in this picture. 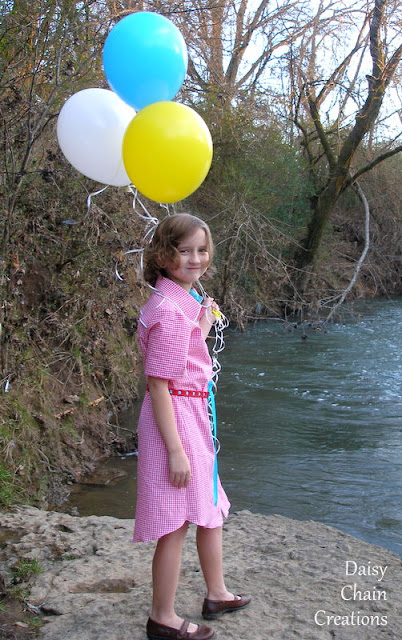 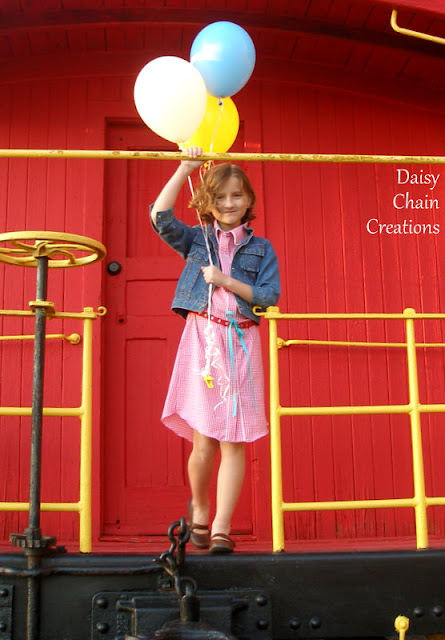 Now for Clara's dress.  I had this fabric that kind of went along with the colors I had picked, but thought it a little too childish for Sophia.  Plus It was not symmetrical and ever since I bought it a few years ago from Ikea (it was in the children's textiles section), I've been a little flummoxed on how to use it. It's a little busier than what I normally would chose, but it seemed like such fun fabric. 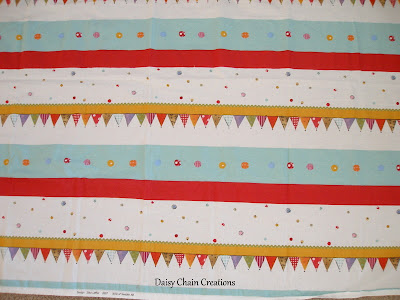 I decided to do it up, using the Jump Rope Dress from Oliver & S (which apparently they don't make anymore, because I can't find it on their site).  This is one of those patterns that I thoroughly enjoy sewing each and every time.  So well written and I just love the style of it.  It was a lot of fun picking where to place the pattern pieces to get the look I wanted. 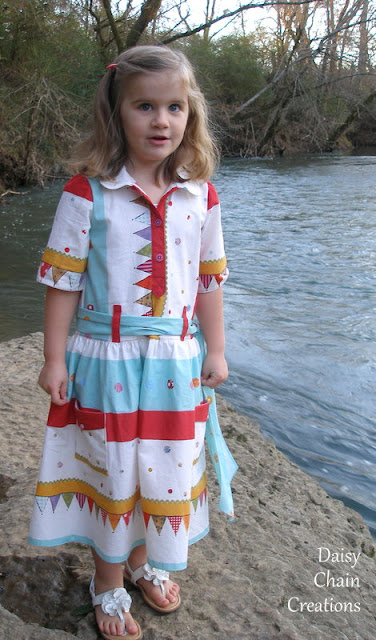 I decided to let the front be asymmetrical and was tickled to figure out that the placket would fit where it did, with the bunting on one side and the rickrack on the other.  I chose the solid red for the placket and tabs to ground it a little and keep it from looking even busier. 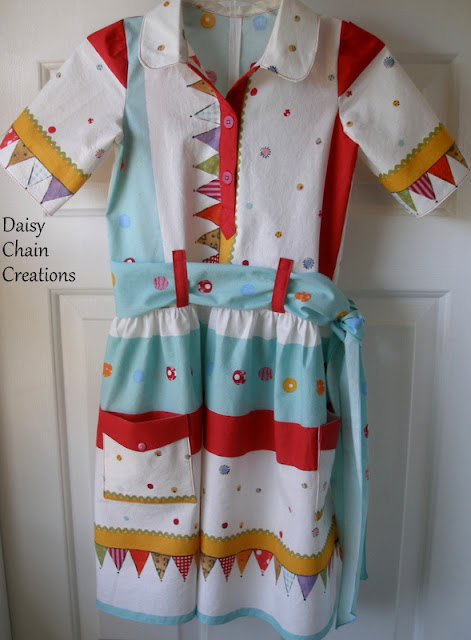 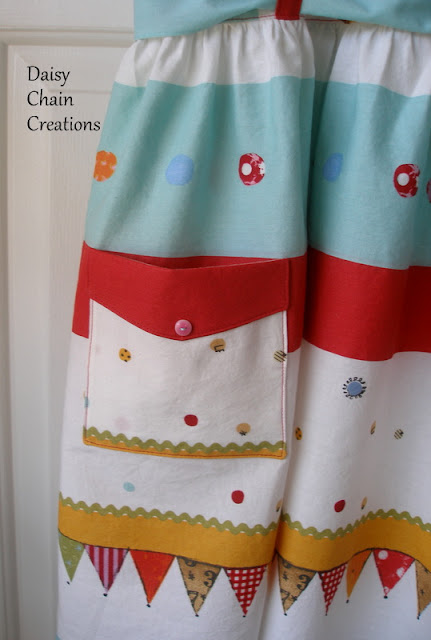 A lot of the top stitching I did in red as well.  More because that is what I had in my machine after doing the button holes and placket, but I do like the contrast on the white parts of the collar and sleeves.

The sleeves are one thing that I changed from the pattern.  The original has a cuff with a tab, but I really wanted to keep the bunting as the edge of the sleeve, so I just finished them off with a rolled hem.  The sash is the other thing I changed, by keeping it open instead of doubling it and turning it right side out. 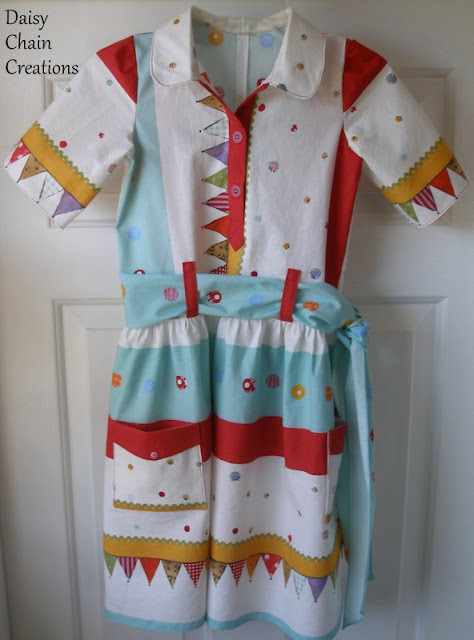 Finally, the back.  I figured the asymmetrical look would work for the front because of the placket, but didn't think it would work for the back.  Instead of cutting the back on the fold, I made sure to cut mirror images of the back piece and then just sewed them together.  So yes the back has a seam (and I do wish I would have thought to line up the circles better), but I like that it is (almost) symmetrical. 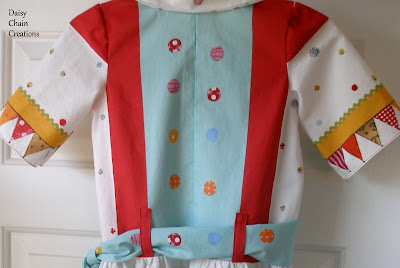 And just because she is so darn cute, has such an expressive face and didn't get to participate in PR&P this season, here are some more pictures of Clara. 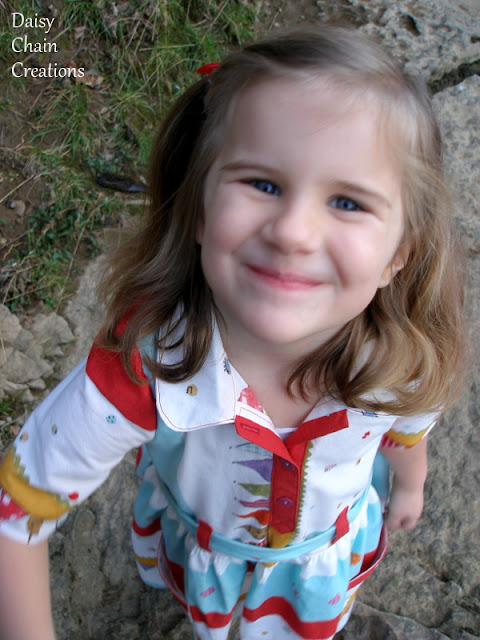 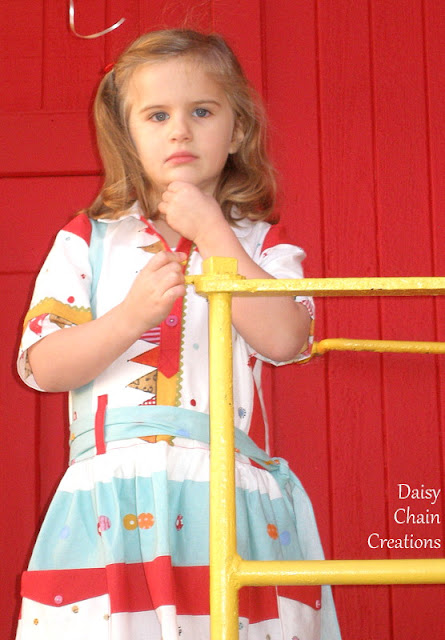 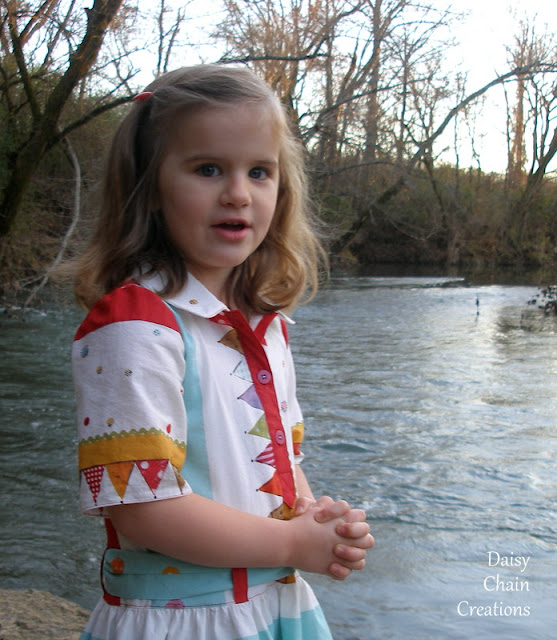 A view of the backs of both dresses. 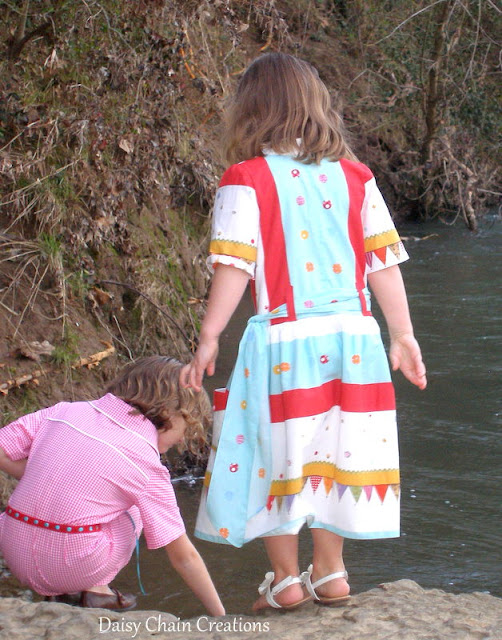 And just some cute pictures of the girls together...wow if you stuck around this long, you deserve a pat on the back. 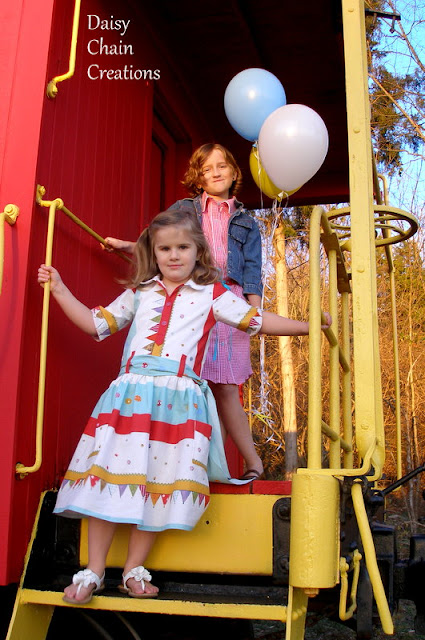 Sadly, my camera ran out of batteries when we got to the caboose.  I wish I could have gotten more pictures here, because I like how these turned out.  I was only able to get a couple though. 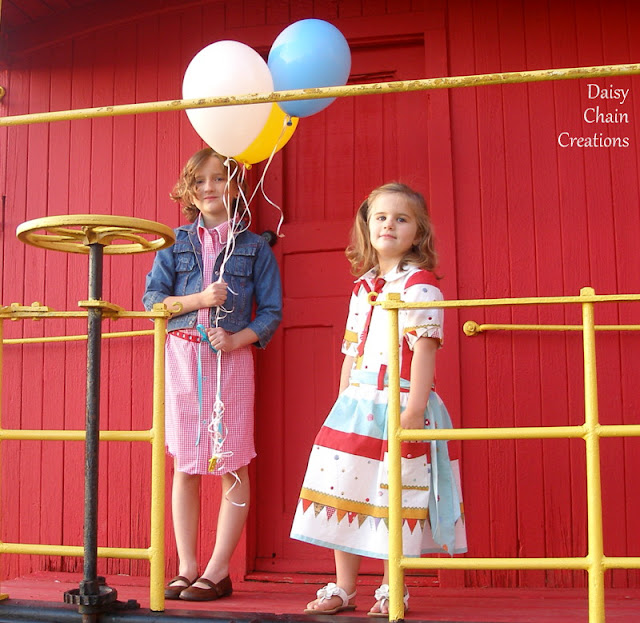