So this is the final week for Sowing While You Sew!  I can't believe time has flown by.  I'll do a little recap post next week with some of the catching up thrown in (I have a new camera--yeah!!), but this is the final project.  And who better to present it than the amazing Catherine, better known as Super Woman (Can you believe she was competing in 2 competitions and finished in the top 2 of both...at the same time?!).  She truly is not only talented, but full of grace...like her blog.  You should check it out!
Here she is with her lovely daughter to share their experience making zippered pouches. 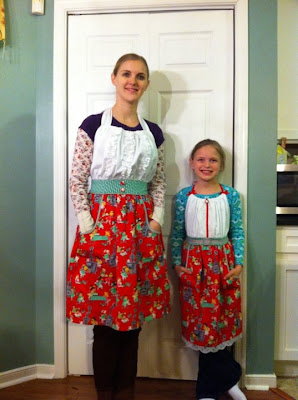 Hello everyone! I am Catherine (and Emmie) and I blog over at cathgrace, where I pretty much do a bit of everything, but sewing is my ultimate passion! I am so excited to be over here at Daisy Chain Creations today, I think that Sowing While You Sew is such a lovely theme for a series!!! I have been sewing with my children (and more specifically my Daughter as soon as she showed a particular interest) for years now, and I think we have some of our loveliest conversations working side by side creating things. 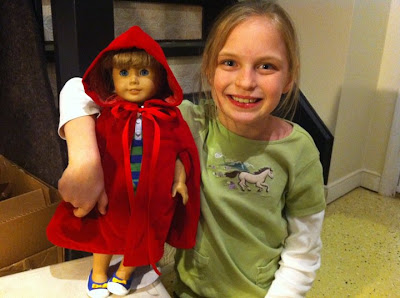 She was 8 when she started making clothes for her American Girl Dolls (I actually teach adults to sew using 18" dolls, since they can practice with commercial patterns, and any type of fabric that suits their fancy without any major traumas or financial loss if anything doesn't work out!) 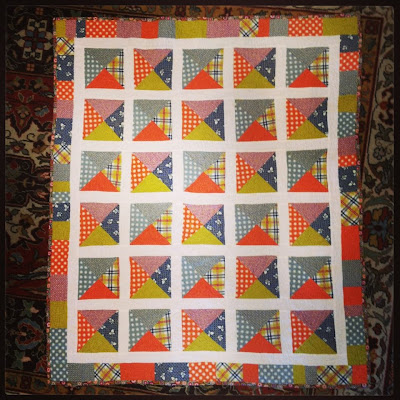 This year Emmie got a sewing machine for Christmas, (I was tired of finding her in my seat sewing every time I got up to iron something!) And she cutout and pieced this entire quilt herself! (she's 10 now.) I helped with 50% of the machine quilting because she was very worried about ruining all her work with the quilting, so I would take turns with her every other square (I did all the squares that have plaid in them.)

For our Sowing While You Sew project, Emmie and I are making lined, zipper pouches. Emmie has never worked with zips before; so in addition to learning how to put in a zip, we will be working with french seams, full lining, and top stitching.

Emmie measured and cut out all of her own fabric, after watching me cut out mine (my project is not really shown here until the end, it's a lot easier to photograph her while she does things.) 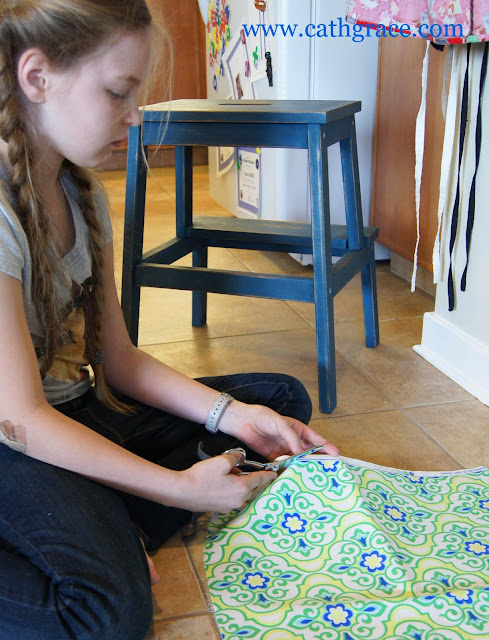 I sewed all the steps first, one at a time for Emmie to watch, and then she repeated the step with her own project.

The zip that Emmie ended up picking out  was a hidden zip, but we put it in so that the green showed, since that's actually why she picked out the zip in the first place. (I would generally recommend a regular zip for this, but we live in South Korea, and the color selection at our local store was fairly slim.)

Step one was to sew the small squares onto the ends of the zip, we sewed the outer fabric square and the zip right sides together, across the end at the correct finished zip length. 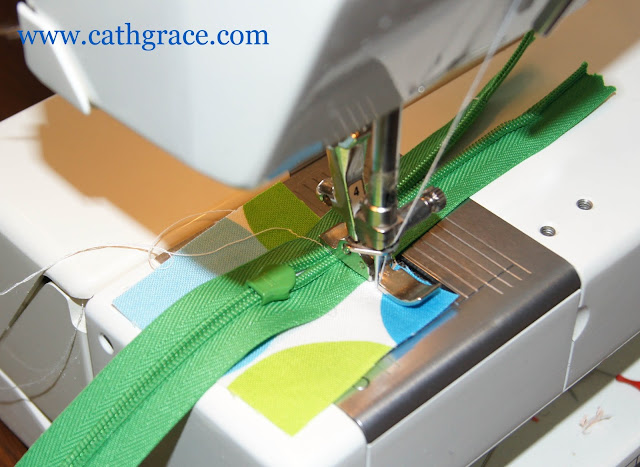 Next we sandwiched the zipper with the inner fabric small square, keeping the first seam on top and using it as a guide for the new seam. After both fabrics were sewn onto the zip, they were folded back and top stitched down. 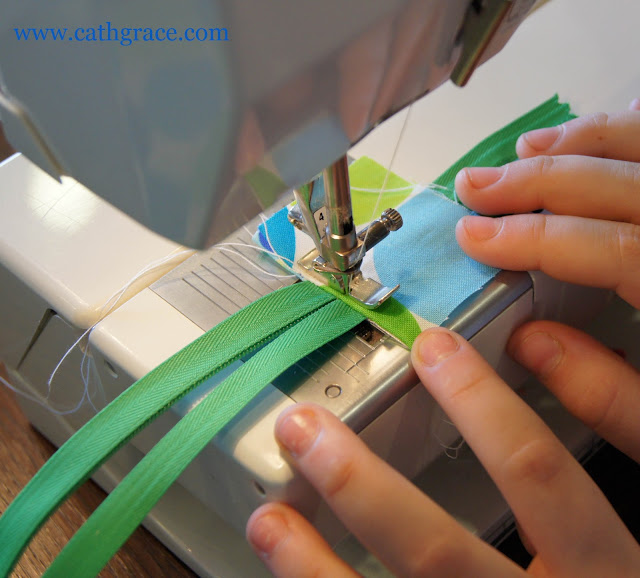 Here's what the finished zips look like with the fabric sewn to the ends, you can see that they are finished both front and back. The third image shows my zip in the line up too, since I have a different style zip then Emmie has, both of our's were trimmed to width in the last picture too. (The finished length on Emmie's zip with fabric is 10") 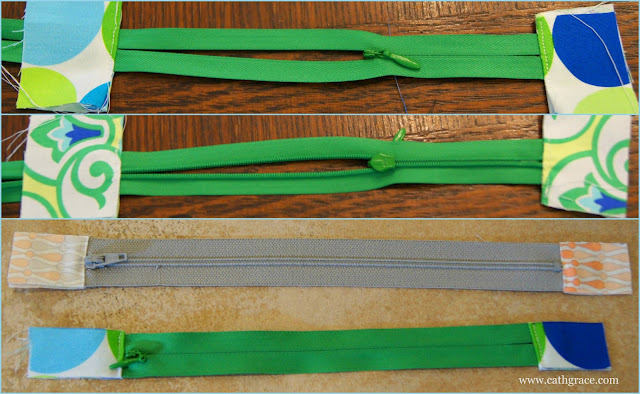 Now we sewed down the length of the zips, using a zipper foot, with the outer fabric first, 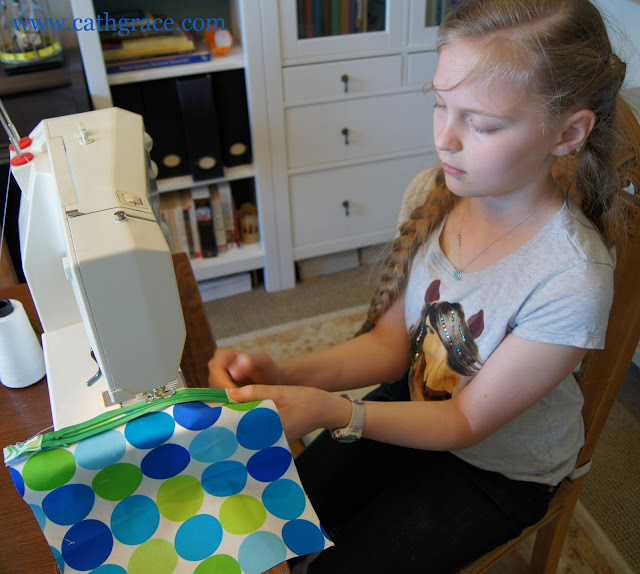 and then we added the lining fabric in the same fabric, zip, fabric sandwich that we did before, and sewed down the side again, using the first stitch line as a guide. (You can just do it all at once, but I like the stepped approach so there is less to control at once.) 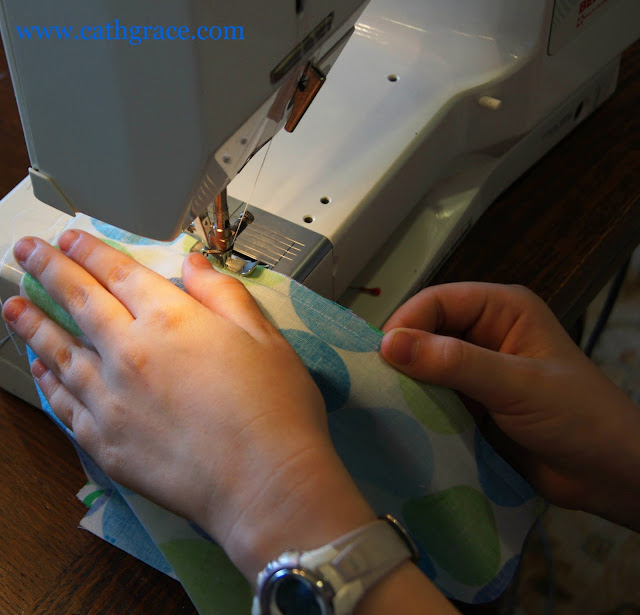 Finally we folded both fabrics back, and top stitched them away from the zip. 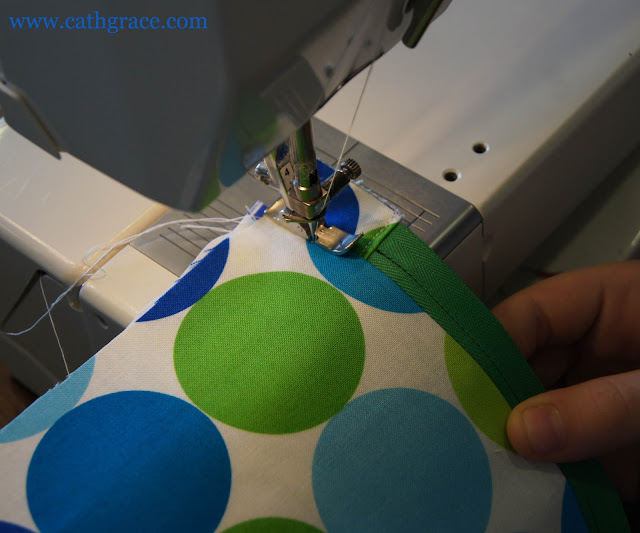 here's what the front and the back look like with the one side done for the left two pictures, and then on the right two pictures we folded up the outer fabric to the other side of the zip, and stitched in place. 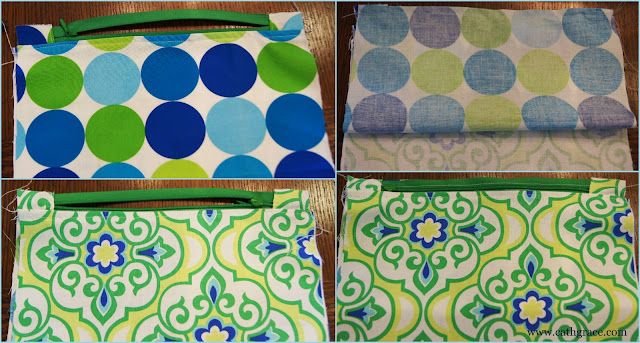 Then we folded up the lining on the other side and sewed it down. 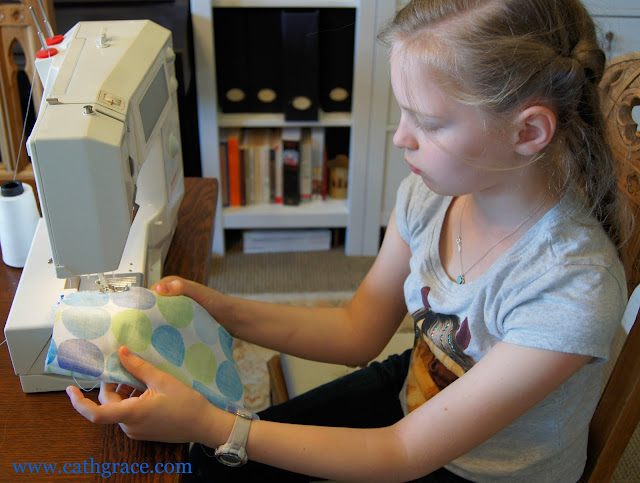 Here's the shape that happens, sort of a double loop of wrong sides out. To turn the project, simply flip the outer fabric over the lining fabric. Top stitching this new side was a little tight, bit still doable with slow stitching and keeping control of all the fabric. 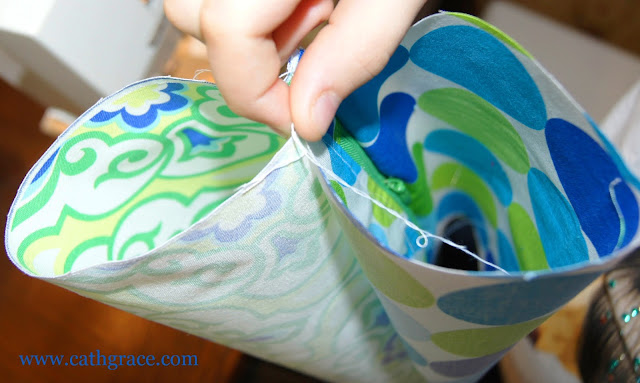 At this point the bag can have several different options, the zip can be offset towards the top, in the center, or fully on the top of the pouch. 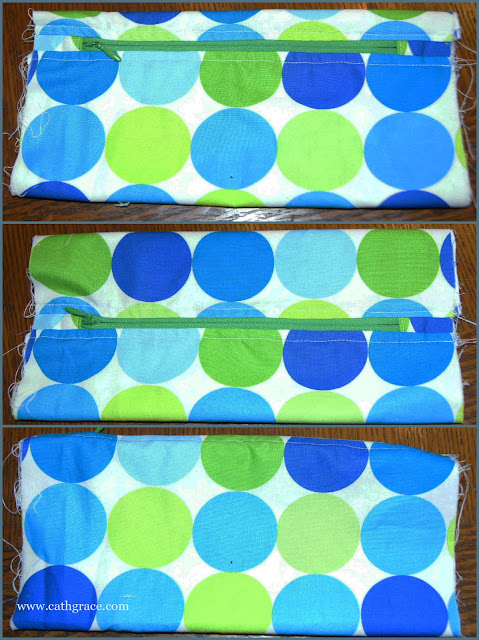 Emmie decided that she liked the offset towards the top look best, so we went with that one for both pouches. The top left picture has had the sides sewn down, RIGHT SIDES OUT. The top left has been trimmed closely, with a little less than 1/8". On the bottom left, Emmie decided she wanted her bag to have a wrist strap, so she added a piece of elastic, we set it down from the top a bit, so it didn't affect the corner. Then the final picture is the key to finishing the whole bag professionally, we turned the bag inside out, and sewed 1/4" seams down the side on the inside, making french seams, and hiding all the raw edges that were on the outside.

Finally we turned the bags right side out, and pressed them with a hot steaming iron. My bag is made in the exact same way as Emmie's, just slightly bigger, and with a ribbon tag rather than an elastic wrist strap.

Emmie is so proud of the work she put into this project, I think tackling a zipper was a big deal for her, and she loved the french seams. I think that adding the fabric ends on the zip, removes a lot of the problems that can arise from making a zippered bag, so she didn't have anything bulky in her seams to fight her, and was set up for success.

Thank you so much for having us Sally, we had a lovely time working on this together, and have a whole bunch of new ideas, for what we want to do to embellish our next set of zippered pouches since we have the basics down now. There are a lot of small orphanages here in Korea, (children can be legally orphaned by divorce here) and we think that making some treasure bags for personal items could be a really nice project; and one that is totally doable for just the two of us in an orphanage with only 15-16 kids!

Posted by sallyavena at 3:00 AM