I have the wonderful honor to present to you the lovely Matinee Dress brought to you by Jennuine Design. 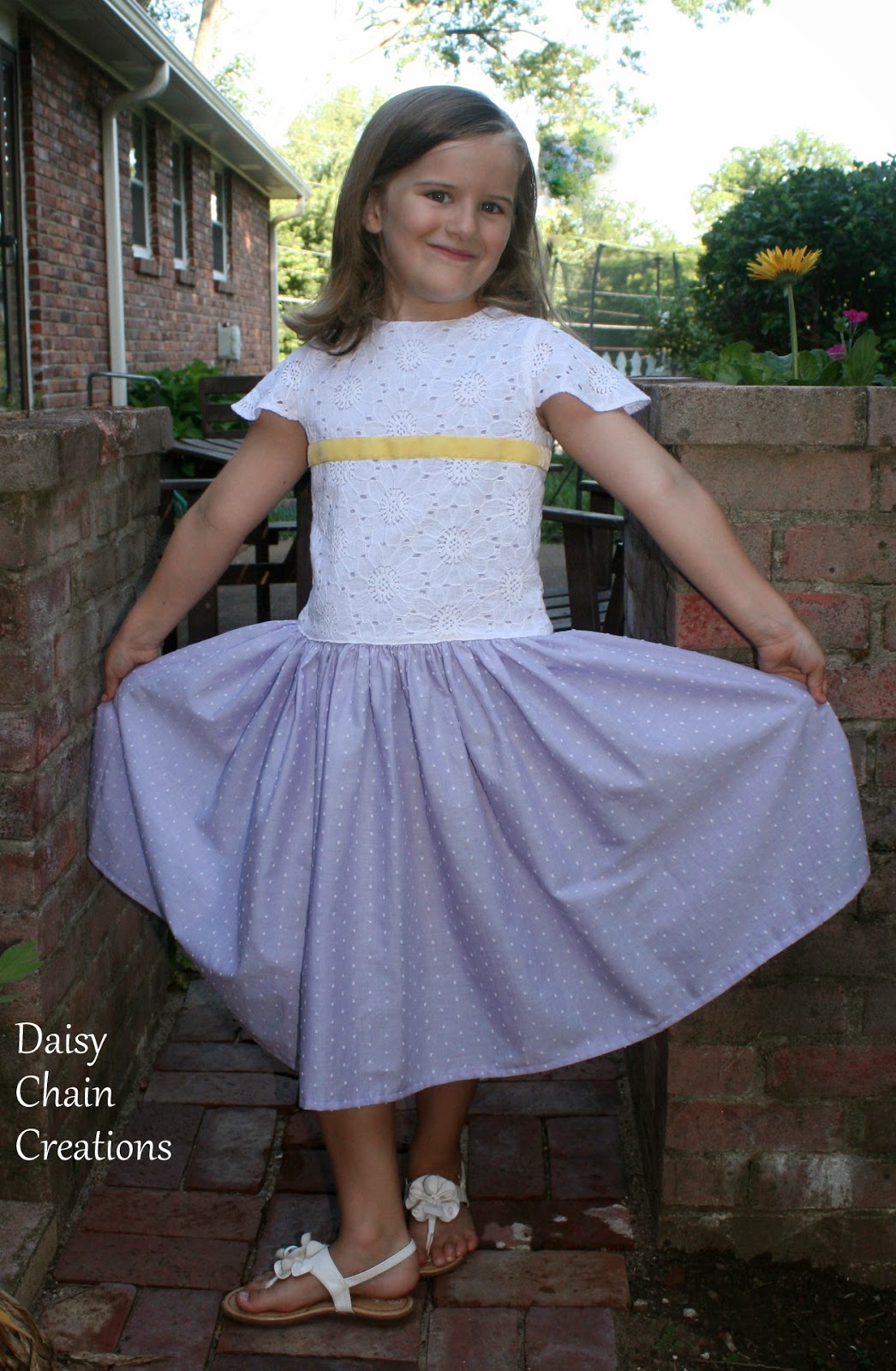 The pattern itself was a delight to work with...great illustrations and easy to follow instructions...but the finished product is the icing on the cake.  Just look how cute this dress looks! First I started with some amazingly soft Swiss dot in purple, Clara's favorite color. Then I added the lace overlay and velvet yellow ribbon for some contrast. 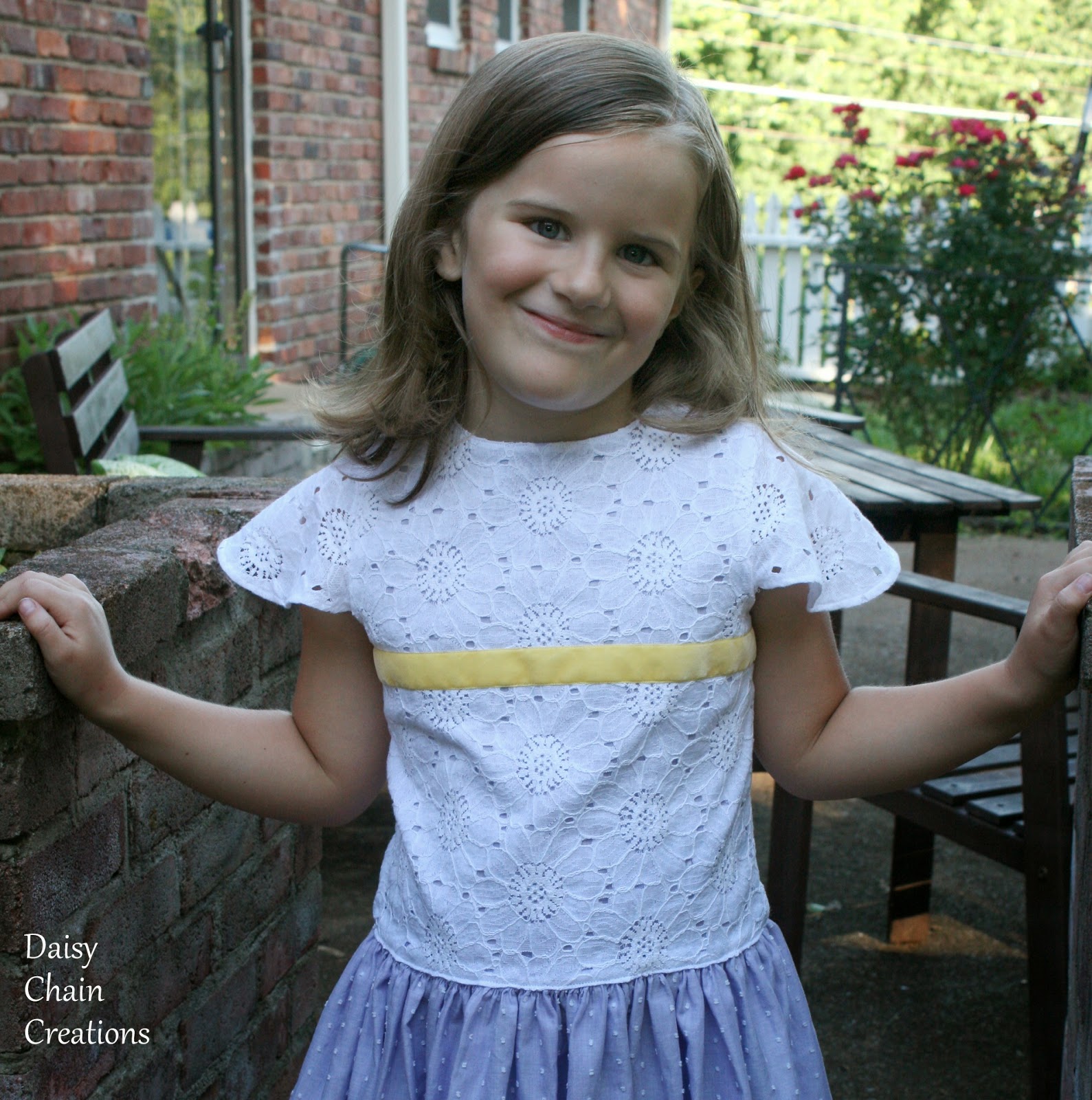 Then because it's a pattern tour, I had a little fun with the pattern and added a few changes, mostly to fill Clara's wishes for a dress.  The first change I made was to raise the back a little.  My girl's have never liked buttons on their backs, so I figured out a way to make it work without them.  For the sash I used velvet ribbon and just made a little bow that closes with a flat snap. 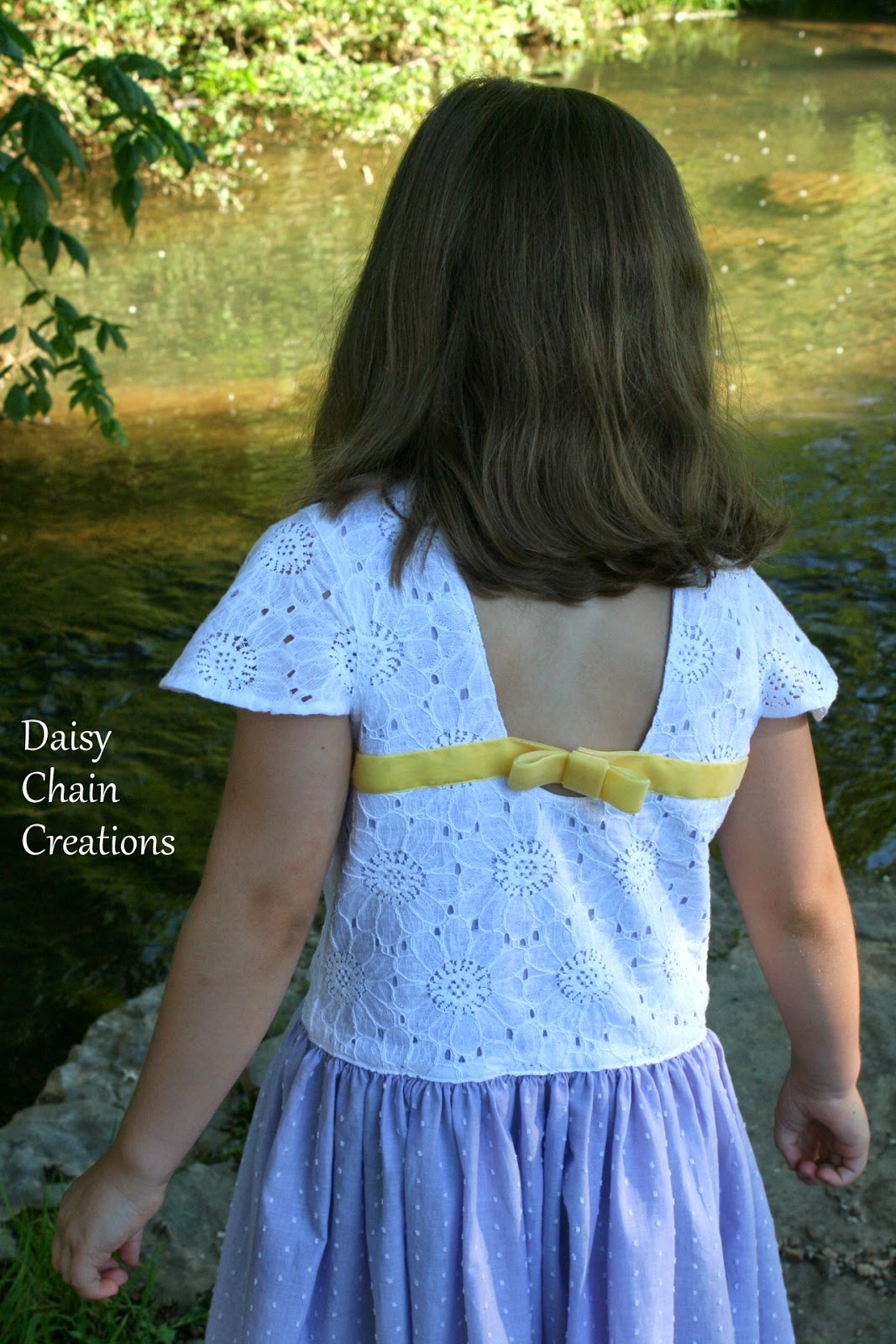 Here you can see how I altered the back. Just ignore the crazy printed lines...that was purely my fault, because I didn't know what I was doing when I printed out the pattern. Another great thing about the pattern is that you can print out just the size you need. I just forgot to click the button when I went to print and then I didn't want to waste the paper, but printed on the wrong side, which led to some confusion with all of the lines. 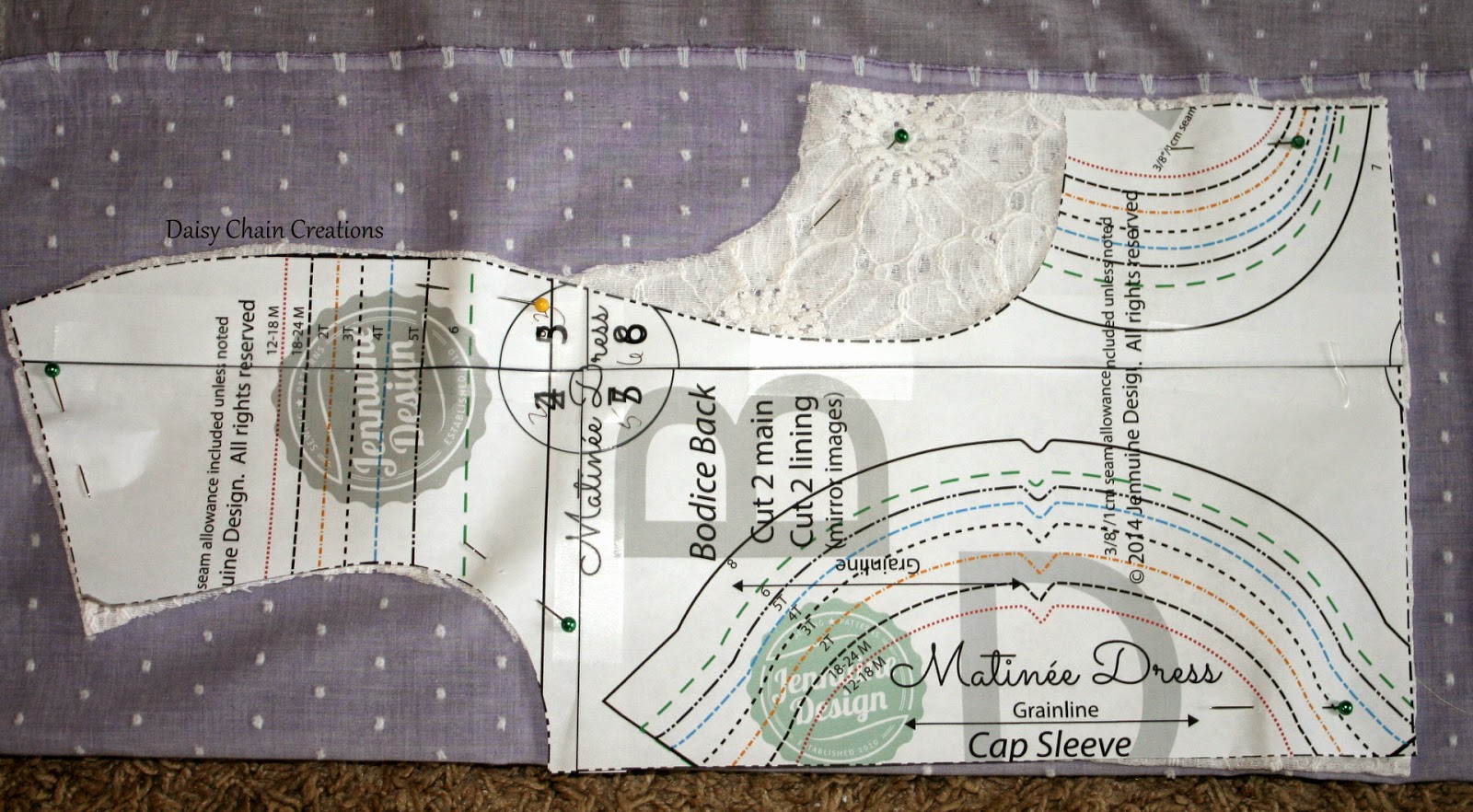 Another thing I did was to add a significant amount of fullness to the skirt.  I did this because part of Clara's request was that the dress be nice and twirly, but also because I just wanted to use up the great fabric and I really didn't know what else I would use it for. 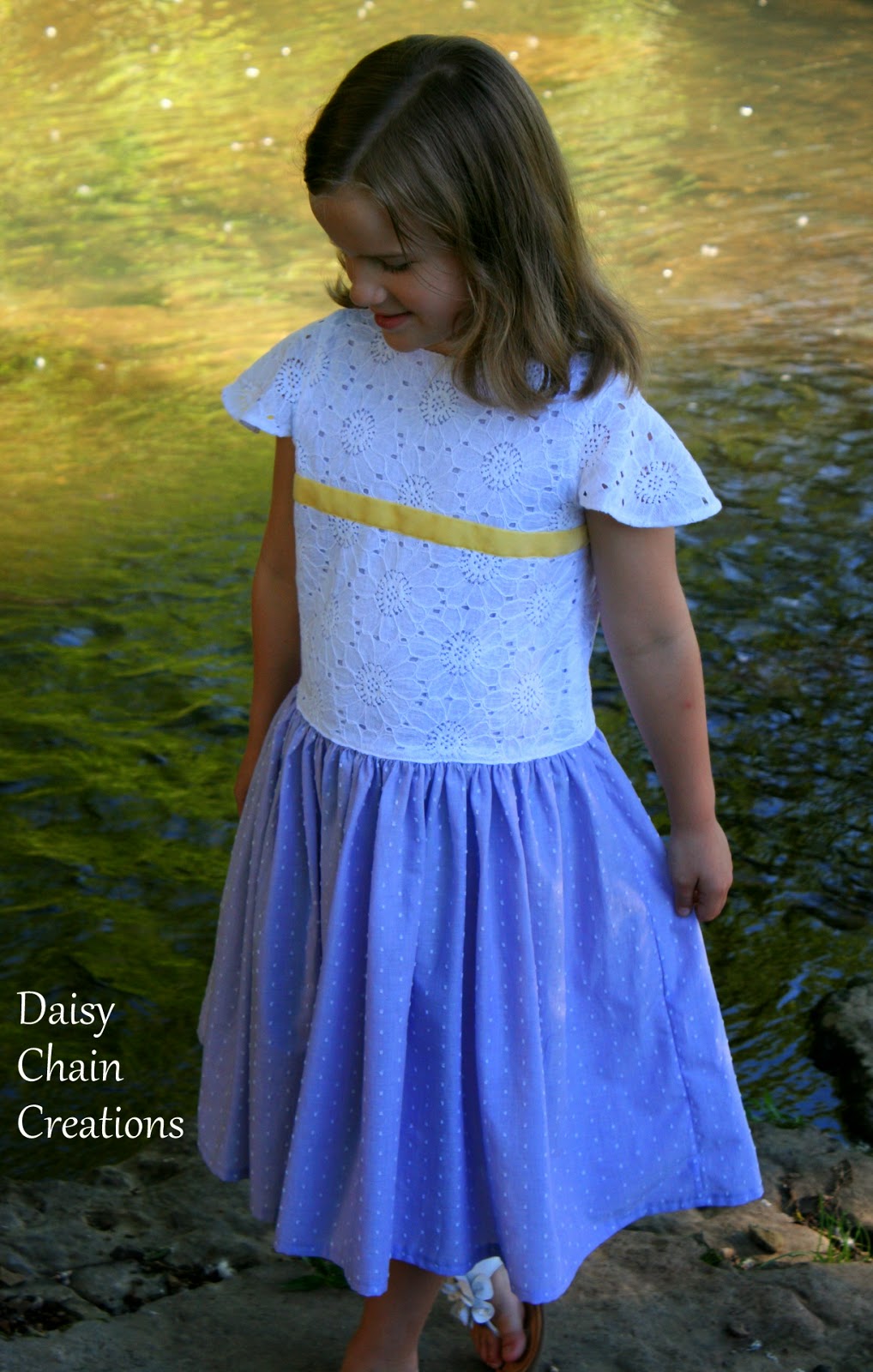 One final thing that I did was to add a little fullness to the sleeves so they would be more "fluttery". Here you can see how I did that. I also just used one layer, finishing the edge of the sleeves instead of lining them, because the lace looked so pretty on it's own. 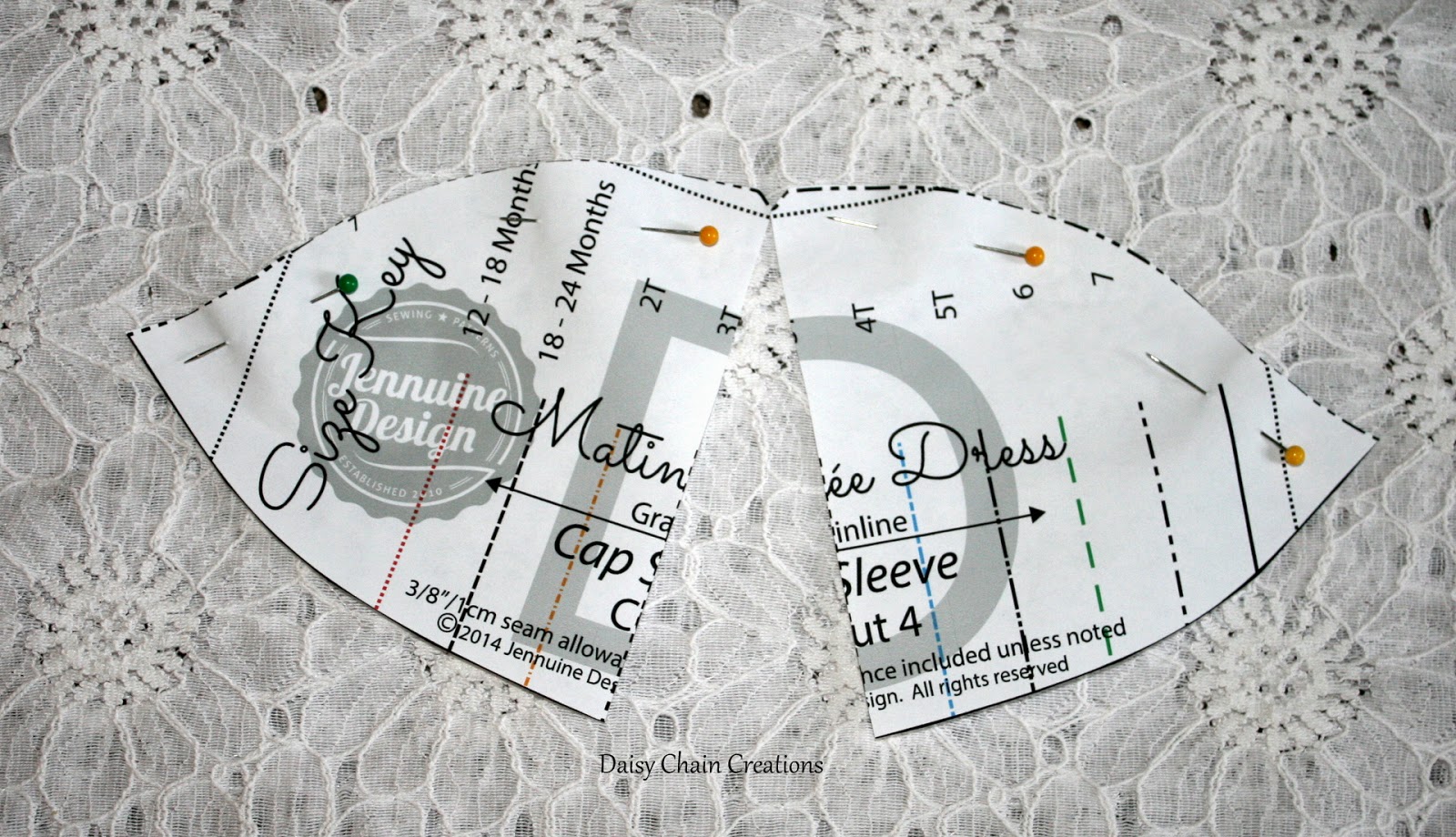 And there you have my first version of the Matinee Dress. 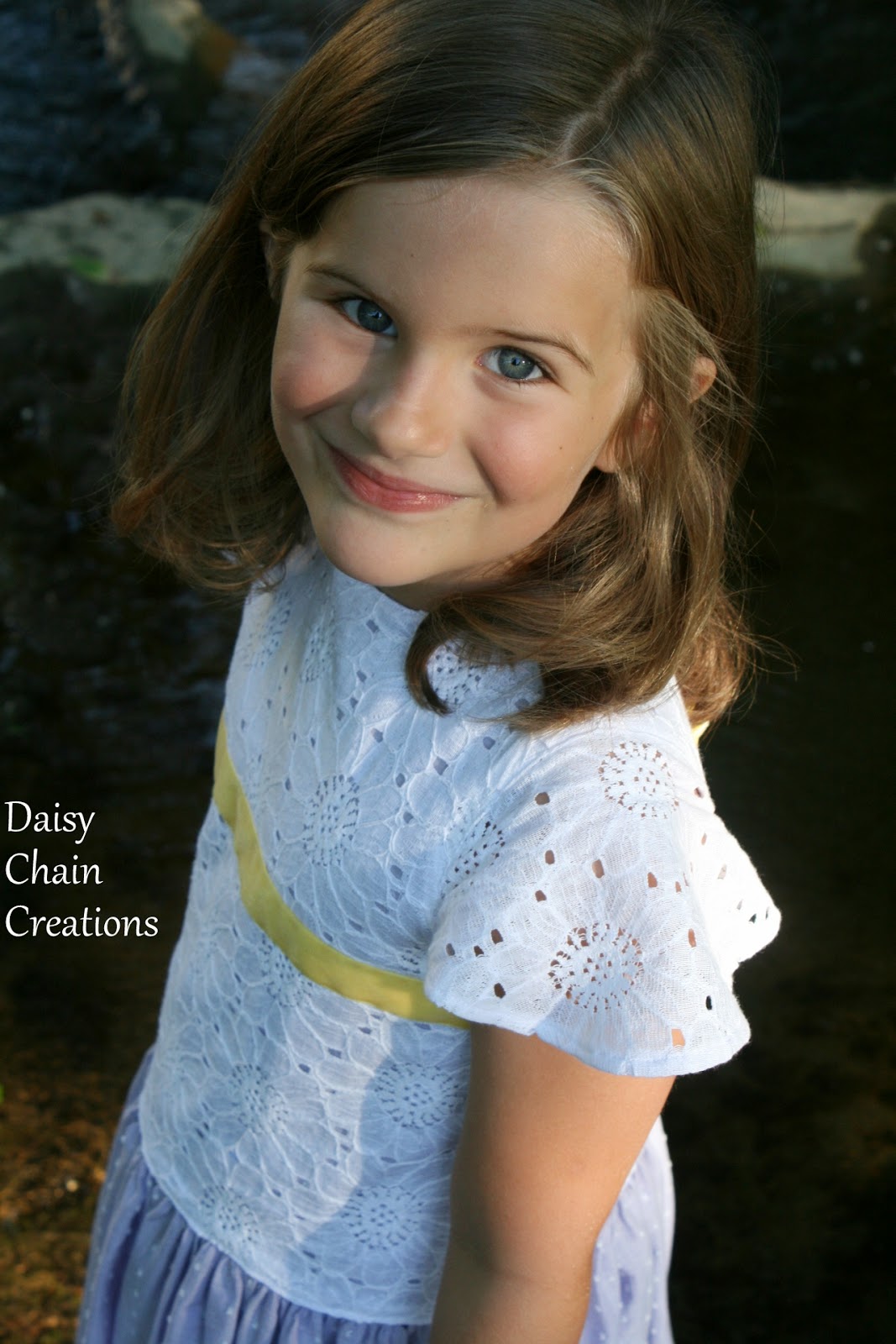 As for my second version, I wanted to see if I could make it out of knit. I love how this version turned out too and Clara loves how comfortable it is.  And it did work with knit. However, the blue knit has only about 25% stretch (it was some old stuff I got from my mom) and therefore I think that is why it worked...not sure if it would really work with something that had more stretch.  I was also very generous with the seams as well, so I was probably taking in more than 3/8ths of an inch. 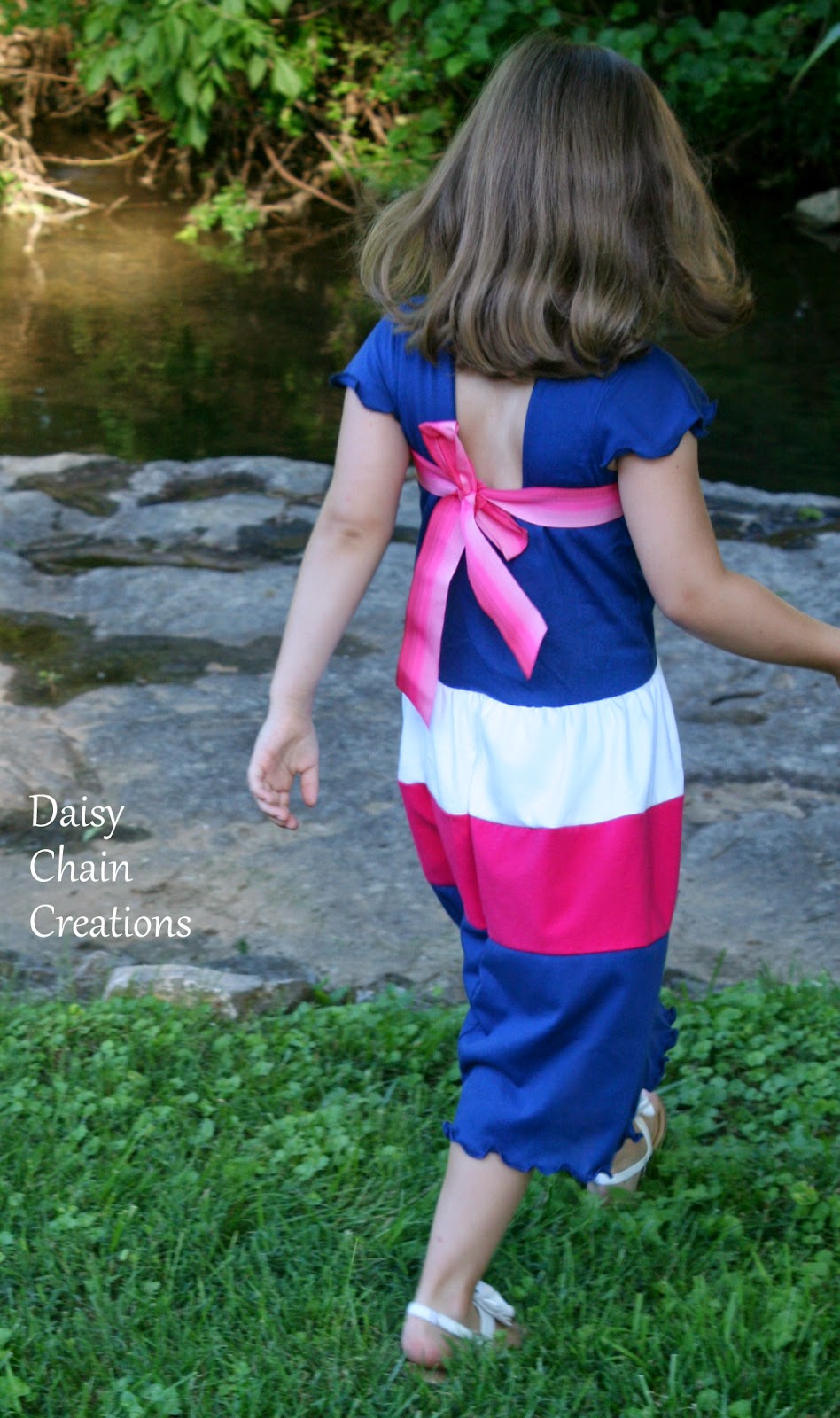 For the sleeves and the hem of the skirt I used a lettuce edge hem.  I also only used one layer on the sleeve again, as well as add a little to the width. And again, I raised the back piece as well. 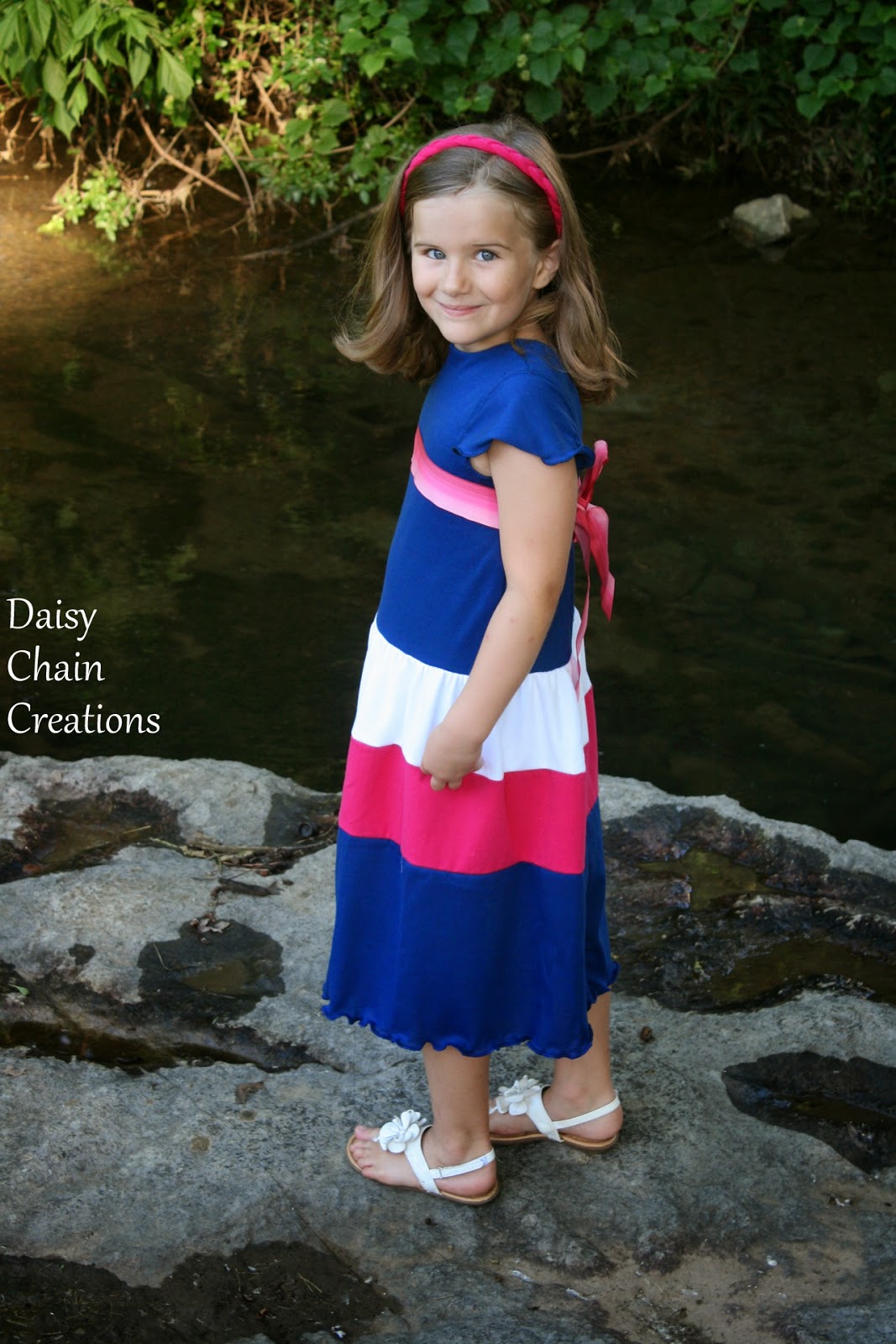 For the sash, I used a ribbon and attached it under the arms with hooks and eyes. I was kind of perplexed on how to attach a ribbon on to the knit and keep the stretch of the knit without distorting it. 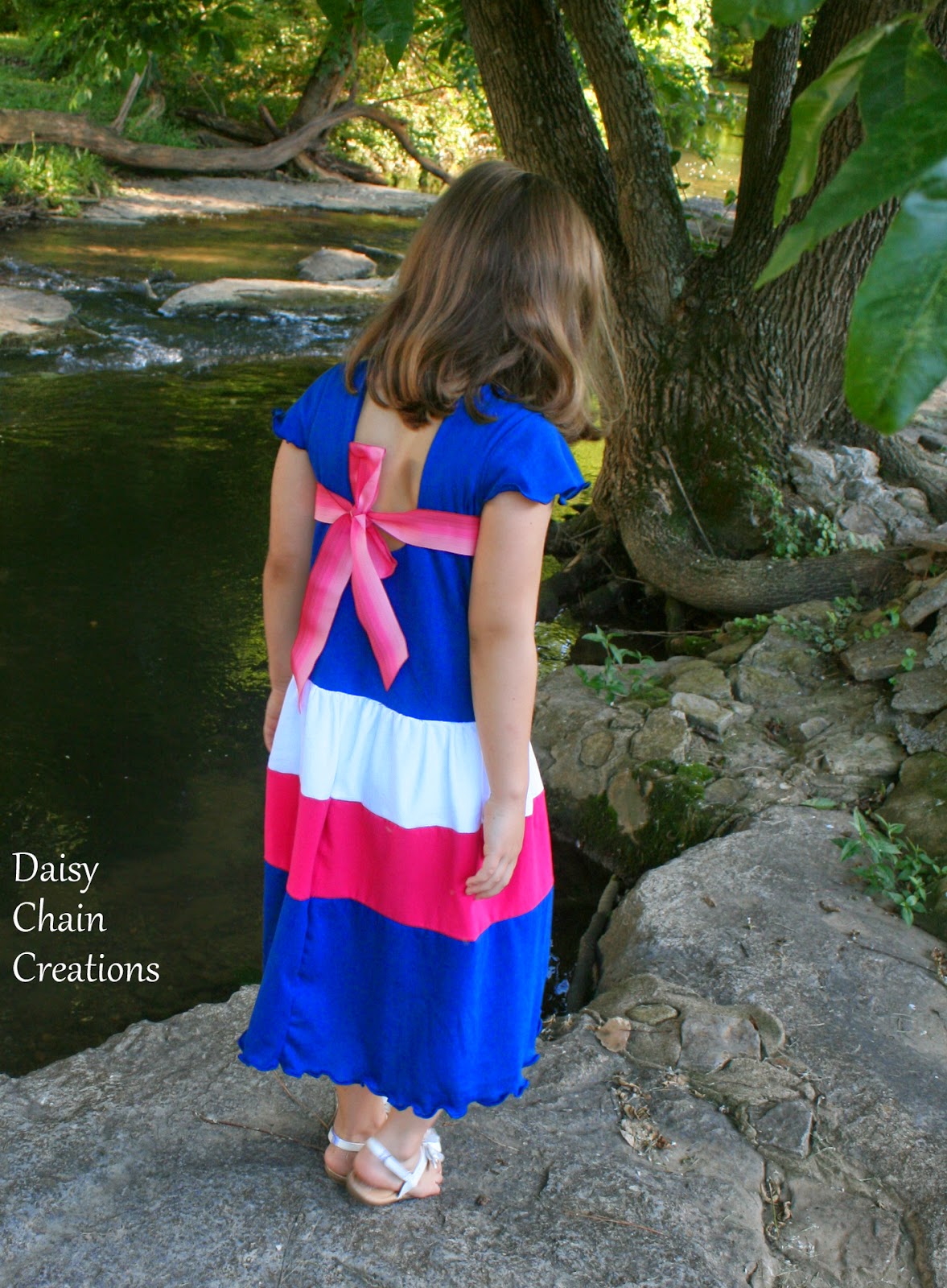 This also means the dress can be worn without the sash for a more casual look. 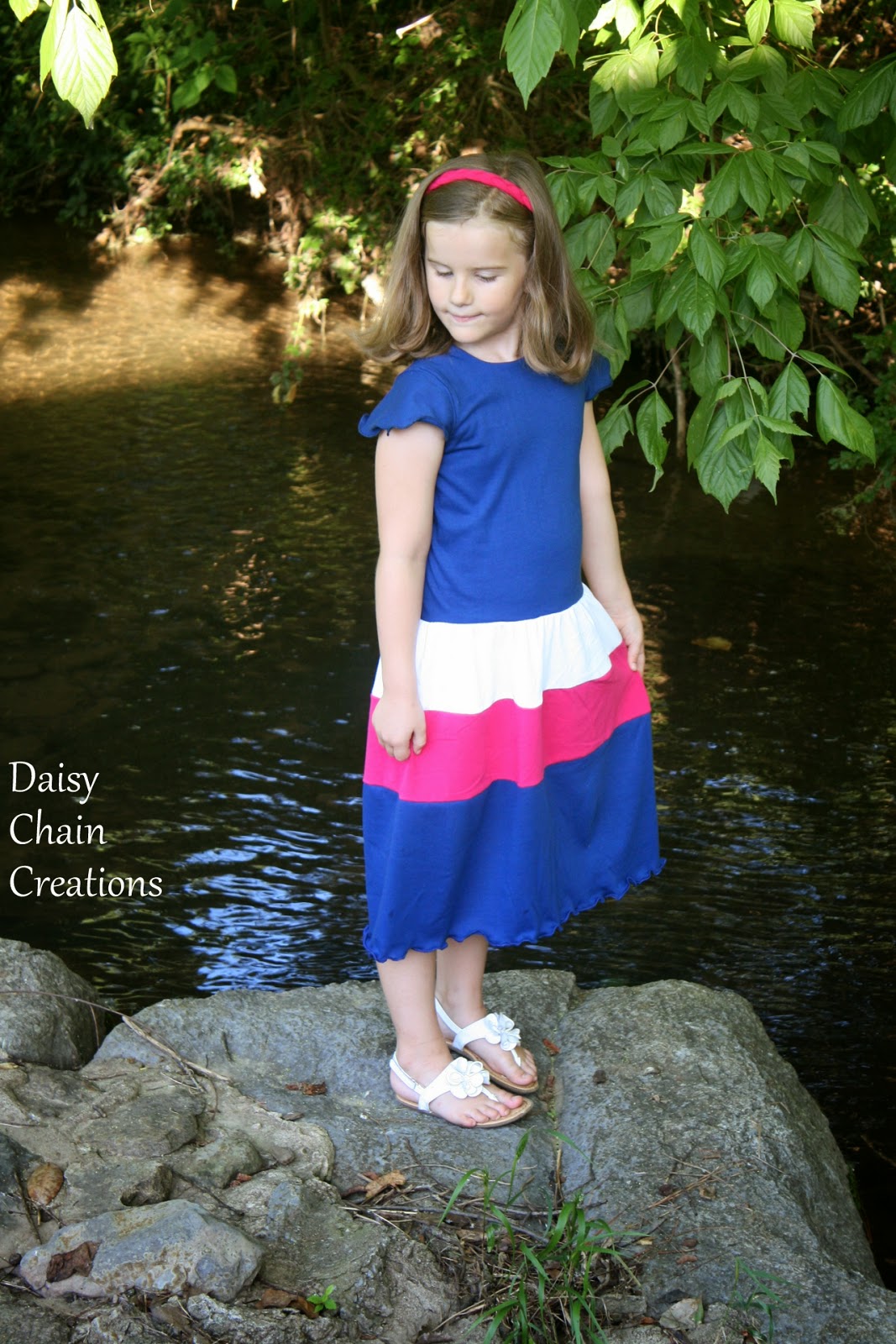 One final thing that I made was a braided head band from 3 strips of knit. I just sewed the ends together after braiding enough to fit her head. Again, another hit...it's nice to get 3 for 3 every once in a while. 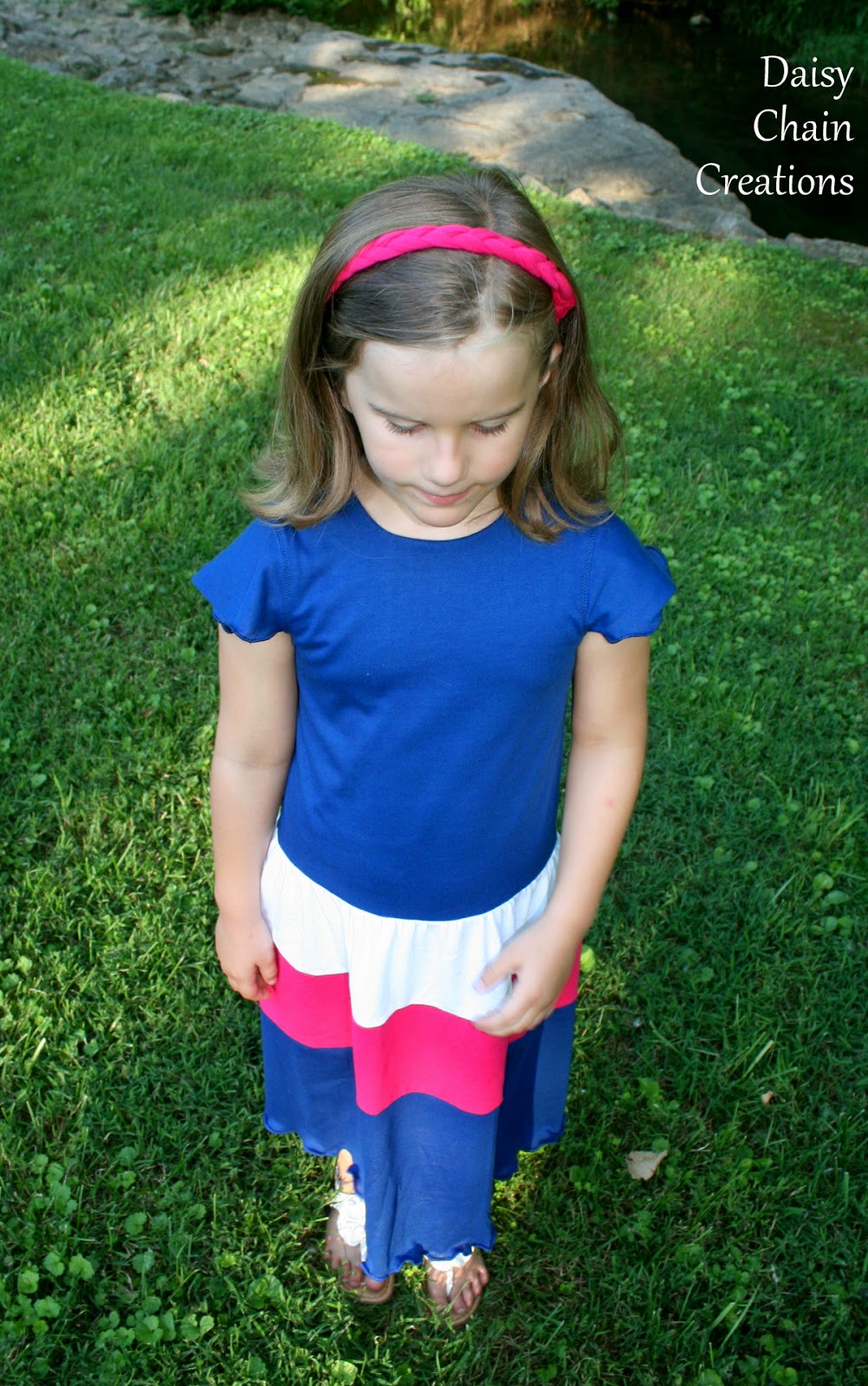 Thanks Jenn for letting me be a part of the tour!
Now for all of the fun stuff...here's the list of who is participating on the blog tour:

And here is who is contributing to the great prize package as part of the give-a-way:

And here is your chance to win:
a Rafflecopter giveaway

Disclaimer: All opinions are purely my own, but I did receive a free copy of the pattern to try it out.
Posted by sallyavena at 5:00 AM